Stem cells are human cells able to differentiate to other types of cells and undergo a potentially unlimited number of cell division cycles. The common characteristic of all stem cells is their self-renewal ability. Recent research showed that human adipose tissue contains a high count of mature progenitor cells. The adipose derived mature progenitor cells were demonstrated to have “plasticity” and eventually differentiate to become muscle, cartilage and bone cells.
Thus, they can be used to repair damage in different types of tissue. They only need an environment where their potential can be fully utilised. The stromal vascular fraction (SVF) is known as such optimum environment, as it contains immunomodulating agents, preventing cell death, forming new, normal blood vessels, factors modulating tissue regeneration and – most importantly – paracrine hormones, which participate in chemical signalling, a form of cell-to-cell communication.
Stem cells can be derived from different sources – mobilised peripheral blood, bone marrow and adipose tissue.
However, each source differs in stem cell composition and their regenerative properties.

Does not contain many stem cells, since mostly the mature and differentiated cells ready to perform their highly specialist functions are released to circulation. In order to increase the stem cell count in peripheral blood, growth factors (GCSF or GMCSF) can be administered a few days prior to scheduled cell harvesting. After the blood sample is collected, the cells are separated according to their type. Stem cells can also be multiplied in vitro in laboratory conditions. However, even this process does not ensure a sufficient number of stem cells. The method does not yield the stromal vascular fraction (SVF).

Therefore, there is some (not short) time interval between cell harvesting and administration.
The method does not yield the stromal vascular fraction (SVF).

Adipose tissue contains 2500-fold more stem cells than bone marrow. Furthermore, it contains stromal vascular fraction (SVF), which constitutes natural environment for regenerative cells. Adipose tissue is easy to harvest. Furthermore, we usually have a bit excess of it. Thus, it is possible to combine aesthetic aspects of lipomodelling with therapeutic effect of adipose derived regenerative and stem cells. However, to ensure full potential of ADRCs, several requirements must be met. Enzymatic process is a prerequisite for stem and regenerative cells to be harvested from adipose tissue. It is not enough for the adipose tissue to undergo a standard wash and centrifugation cycle. Furthermore, tissue centrifugation damages the cells, including the ADRCs. Therefore, ADIPOSE TISSUE SHOULD NOT BE PROCESSED BY CENTRIFUGATION PRIOR TO ADRC HARVESTING. Similarly, nobody processes the liver by centrifugation before transplant. Adipose tissue should be seen as any other tissue type, as it follows the same laws of Physics. Thus, washing, centrifugation and emulsification of adipose tissue does not ensure harvesting stem and regenerative cells.
Cell cultures or enzymatic processing are the only methods to ensure sufficient number of stem cells for treatment.
However, only simultaneous enzymatic processing yields stromal vascular fraction containing stem and regenerative cells.
Only certified enzymatic processing of adipose tissue derived stem and regenerative cells can guarantee appropriate cell count and content, crucial for effective tissue regeneration.
Unfortunately, many private centres offering PRP (platelet rich plasma) treatments state it contains stem cells. Nothing farther from the truth. The stem cell count in the PRP is relatively low and their regenerative properties are limited. PRP modulates inflammatory processes responsible mainly for pain sensation rather than tissue repair.
The Celution 800/CRS is a freestanding centrifuge-equipped device, which uses a disposable Celution 805/CRS consumable set for each individual patient. During the procedure, it extracts, washes and concentrates mature stem cells and other adipose tissue derived adipose cells. The harvested adipose tissue is processed in Celution 800/CRS. Next, it is exposed to Celase reagent. After the tissue is enzymatically digested and mononuclear cells are liberated from the adipose tissue matrix, the Celution 800/CRS device pumps the adipose tissue to the waste while the liberated ADRC fraction is pumped to the centrifugal chamber to get concentrated, where it is washed and concentrated in short centrifugation and washing cycles. The cycles are repeated until the entire volume of ADRC fraction has been processed, and the desired cell population has been localized into the output chamber, where it undergoes a final washing with sterile solution and thus becomes ready to be administered as an autologous graft in the same patient. The procedure is unique, because the cells can be immediately re-implanted in the same patient in a single, sterile procedure. 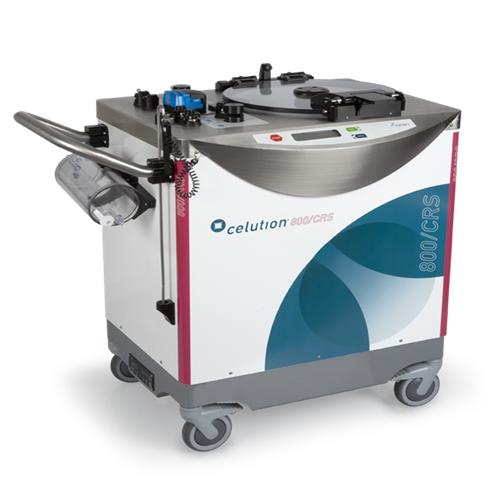 Patient eligibility assessment for Cytori stem cell treatment involves a consultation with an orthopaedist and is based on patient medical history, clinical examination findings as well as an additional ultrasound scan and MRI.

1. Approx. 300mL of patient’s own adipose tissue is harvested (i.e. collected in a liposuction procedure) under local anaesthesia.
2. Harvested adipose tissue is processed in the Celution 800/CRS device. The automated processing involves adipose tissue digestion with Celase processing enzyme reagent (a proprietary three-enzyme reagent). Once digestion is complete and the mononuclear cells are released from adipose tissue, the Celution 800/CRS device pumps the unwanted digested adipose tissue out, whilst ADRC fraction is pumped into a centrifuge chamber, where it is washed and concentrated in short centrifugation and washing cycles. The cycles are repeated until the entire volume of ADRC fraction has been processed, and the desired cell population has been localized into the output chamber, where it undergoes a final washing with sterile solution and thus becomes ready to be administered as an autologous graft in the same patient in order to accelerate healing of and/or repair and regenerate injured or otherwise abnormal bone, ligament or muscle.
3. The stem and regenerative cells obtained this way are then re-implanted in the same patient (in the target site) in an ultrasound-guided injection administered by the orthopaedist.
The entire Cytori stem cell treatment procedure of harvesting, processing and administering the ADRCs is performed all-in-one place and lasts about 2 hours. You will remain under local anaesthesia (i.e. you will be awake but numb) for that period. The tissue does not leave the treatment room and is processed as a sterile procedure in a closed system.

Continue wearing your compression garments as prescribed for at least 4 weeks.
Manual lymphatic drainage (MLD) should be performed from the second day after treatment onwards.
Ensure the liposuction and stem cell injection site are clean.
If stem cells were administered into the joint, please avoid physical activity for two weeks.